Recent set of stress test involving the #CryptoVault where it scored an A-. It is a bargain with 2 titanium plates and serialized tamper cable all for under $35! Pick up a couple here 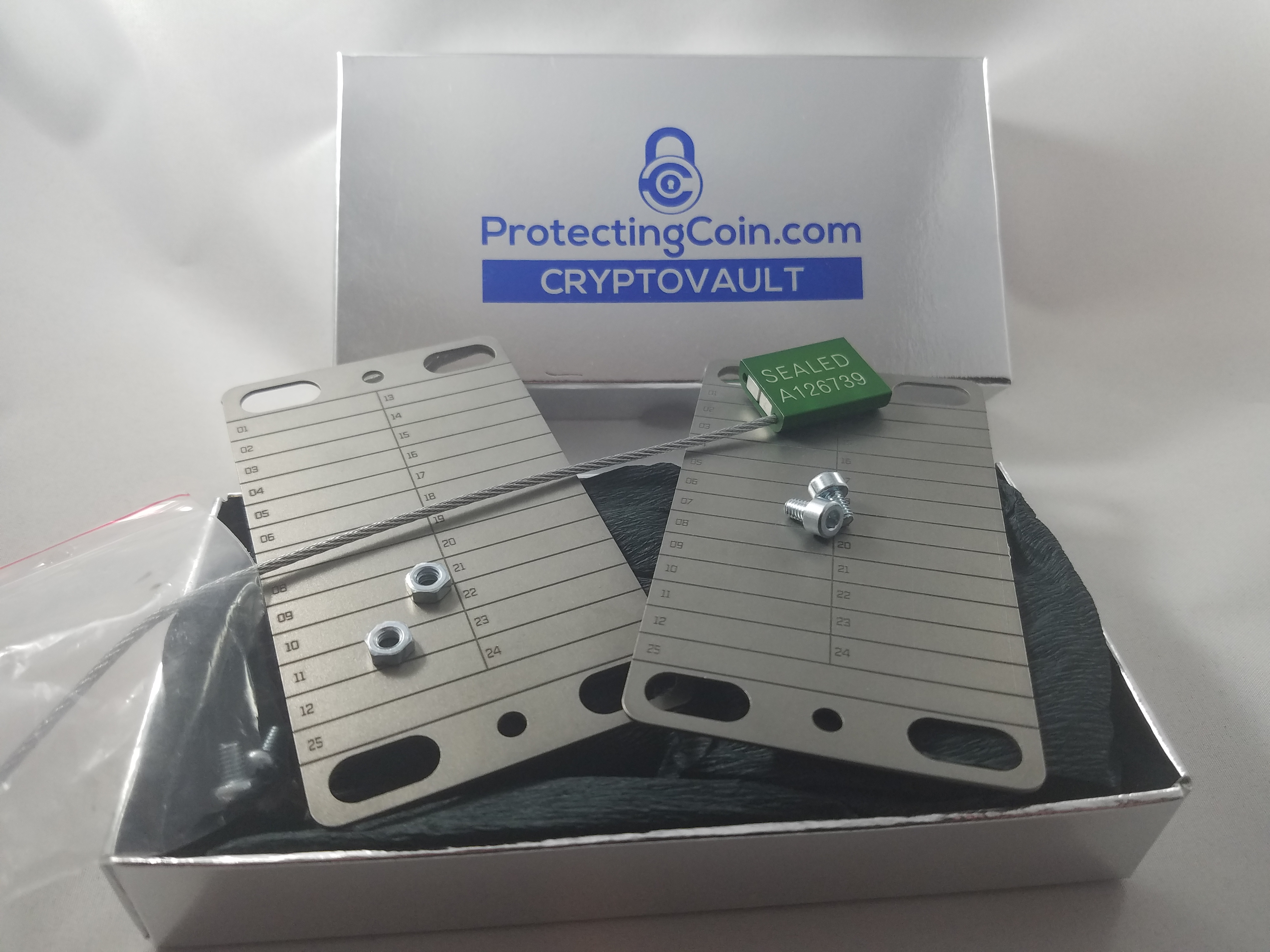 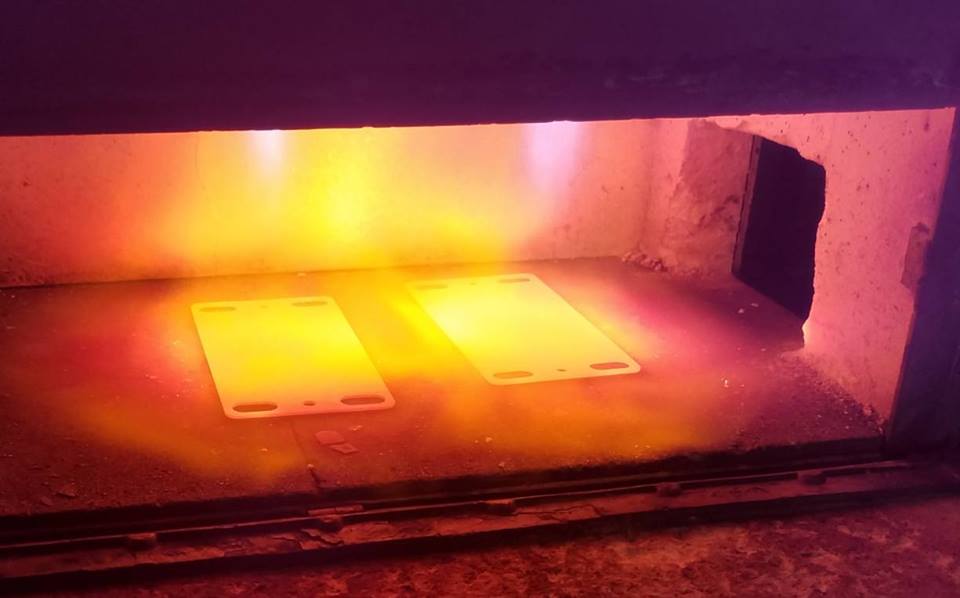 We are opening up a beta test for our new SafeStash Insurance service for Cryptoassets, up to 20 testers.  If we get more interest from testers we will create a wait list if we need to open up a second round of testers.  Open to US residents.

One of the biggest questions we get from customers who purchase hardware wallets and cold storage solutions is where they should store and how they should protect their storage devices.  Most store these in their home with limited physical security and no protection from weather, fire, water, etc.  Those with a growing collection of Cryptoassets have moved to storing devices in either a bank vault box or a private vaulting service but they are surprised to learn that most of these services do not carry or even offer insurance on what you store.

SDBIC and ProtectingCoin have partnered with the second largest financial services company, globally, for underwriting policies on cryptocurrency devices that are stored in bank vaults and select private vaults.  Note, you are not required to disclose what assets are held or quantities.

Here is the sign up for our beta test and we will even send a free gift for your valuable feedback.  We have an extensive FAQ (provided to testers initially) that should answer all of your questions but we hope to develop it further as we receive feedback.

ProtectingCoin CryptoVault is the ultimate in cold recovery seed storage for cryptocurrency.

*Compatible with 12, 24 and 25 (Monero) recovery seeds. The 25th slot can also be used to enter a wallet identifier, passphrase hint, or any other information you chose.

*Compatible with Trezor, Ledger, Keepkey and any other wallets that use up to 25 recovery words.

An excellent explanation of how Mnemonic Seeds function by Andreas Antonopoulos.  The mnemonic seed is used to create a universal seed or backup of your wallet and used by many wallet manufactures.  It allows for a single seed (list of 12-24 common words from a defined list of 2048 words) to be used to restore access to your wallet if it is ever lost or defective.  The use of hierarchical deterministic wallets allows for a single mnemonic seed to represent a near unlimited quantity of keys.

Here is a full list of all 2048 potential words that can be used in a Mnemonic Seed.  The use of Mnemonic Seeds is covered in BIP39 (Bitcoin Improvement Proposal 39)

We are happy to be releasing our screwless hideaway mounts for the Trezor One and Ledger Nano S hardware wallets.  The screwless mount uses a 3M adhesive that will not mark or damage wallet, furniture or other surfaces and is easy to remove at any time (one time use adhesive but you can also use another 3M adhesive strip to move to a new location).  This greatly expands the number of options for mounting our hideaway mounts and makes it easy to get your wallet secured in a hidden location or just mounted to always keep it in the same spot.  The install takes less than 10 seconds.

You can mount these to just about any surface!

We will of course continue to carry our Screw Hideaway mounts for mounting to any wood surface.  Get them today right here on ProtectingCoin.com!

Do you need one-on-one assistance for you, your team or your business to walk through the proper use of cryptocurrency hardware wallets, cold storage and more?

*Rates starting at $120/hour for one-on-one consulting at our offices in Douglasville, GA. (1 hour minimum, additional $10 per hour/attendee)

*Rates starting at $150/hour for on-on-one consulting at your location within 60 miles of Atlanta, GA (2 hour minimum, additional $10 per hour/attendee)

**Ledger has released a firmware update for the Nano S in response to the exploit described in the link.

Ledger released a new Firmware version (1.4.1) for the Ledger Nano S.  “Firmware” is the embedded software on a device that works as the operating instruction for the device.

The Firmware update makes some changes to the user interface, adds support for 18 Cryptocurrency interfaces being installed on the device at one time; this was a big complaint on the previous firmware as it only allowed 4 or 5 at any one time to be installed.   The new Firmware also adds some new methods to lock the device with a 3 second push of both buttons, a method to force users to confirm their recovery seed backup during the setup phase (a good thing) and some optimizations to the speed of the device.

Those are all positives updates but the security update included in the firmware, that you are most likely to hear about, is the resolution of an exploit related to exposing the Private Key on the device.  You should take action to install the new Firmware ASAP, the chance of you being impacted by the exploit is unknown with the information currently released.  Here is a quote from the Ledger update,

Important note: there are some claims on Reddit and Twitter about a critical security issue being found on the Nano S. This is incorrect. The issues found are serious (that’s why we highly recommend the update), but NOT critical. Funds have not been at risk, and there was no demonstration of any real life attack on our devices. We will disclose all technical details after March 20th.

From the information we have reviewed (full reports will not be released until late March as this allows people to patch before releasing full details), the hack to expose a devices private key would require physical access to the device before the seed was created, a 3rd party installing a specific firmware or application, and access to the computer you are using for the Ledger to install specific software and perform specific transaction processes (again, this is early information and some may be speculation at this point as Ledger and the security researcher that discovered the bug have not released a full report.  Ledger has confirmed that there are no cases of this bug being reported in the real world and has only been reproduced in a lab.

More detailed information of new features included in this update:

We do recommend you update as soon as possible to correct this potential bug and also for the new features. While we understand the wide spread concern of such bugs it is important to realize that with each bug  and resulting patch/update, the systems and devices become stronger and more secure.

*Note, heavy load on the Ledger servers to pull down the Firmware update may cause some delays in downloading the update.  If you are not able to update right away, wait a little while and retry.

Check out his most recent YouTube post where Andreas talks Hardware Wallets and levels for securing Cryptocurrency.  The one addition we would make to his advice is to replace the paper that is used to write your backup recovery seed with a form of metal engraving or punched metal letters (CryptoSteel) on Steel or Titanium.  This allows permanency of your recovery seed and protects from water, fire, wind, accidental damage and/or the degradation of ink and paper over time.

*Extra bonus tip – You can use many Hardware Wallets as a cold storage option through your smartphone application with an extra cable.  This allows you to use Cryptocurrency from your phone while still utilizing the extra security advantages of a hardware wallet.