We are happy to be releasing our screwless hideaway mounts for the Trezor One and Ledger Nano S hardware wallets.  The screwless mount uses a 3M adhesive that will not mark or damage wallet, furniture or other surfaces and is easy to remove at any time (one time use adhesive but you can also use another 3M adhesive strip to move to a new location).  This greatly expands the number of options for mounting our hideaway mounts and makes it easy to get your wallet secured in a hidden location or just mounted to always keep it in the same spot.  The install takes less than 10 seconds.

You can mount these to just about any surface!

We will of course continue to carry our Screw Hideaway mounts for mounting to any wood surface.  Get them today right here on ProtectingCoin.com!

Do you need one-on-one assistance for you, your team or your business to walk through the proper use of cryptocurrency hardware wallets, cold storage and more?

*Rates starting at $120/hour for one-on-one consulting at our offices in Douglasville, GA. (1 hour minimum, additional $10 per hour/attendee)

*Rates starting at $150/hour for on-on-one consulting at your location within 60 miles of Atlanta, GA (2 hour minimum, additional $10 per hour/attendee)

We currently offer Bitcoin Cold Storage Coins and will be expanding to carry Bitcoin Cash, Litecoin, Dash, Ethereum and even more currencies will be coming soon.

Cold Storage Coins are an easy way to store cryptocurrency offline and make a great gift to introduce family, friends and colleagues to cryptocurrency.

Available in 1 oz Copper, Silver and Gold (special order).  This creates two unique stores of value; one in precious metals and another with an embedded cryptocurrency wallet.

The Atlanta Blockchain (TAB) Meetup – Pizza and Beer provided by your TAB sponsors!

We have started our new designs for the ProtectingCoin Case/Skin for the Trezor Model T Hardware Wallet.  The new design will feature full coverage for the body, USB cutout and microSD cutouts.  We have begun design/modeling for prototyping and will be completing molds shortly.  Plans are to launch in Q2 of 2018.  The Model T case will be offered in five unique colors.

Subscribe on https://protectingcoin.com for the latest updates on this exciting new release. 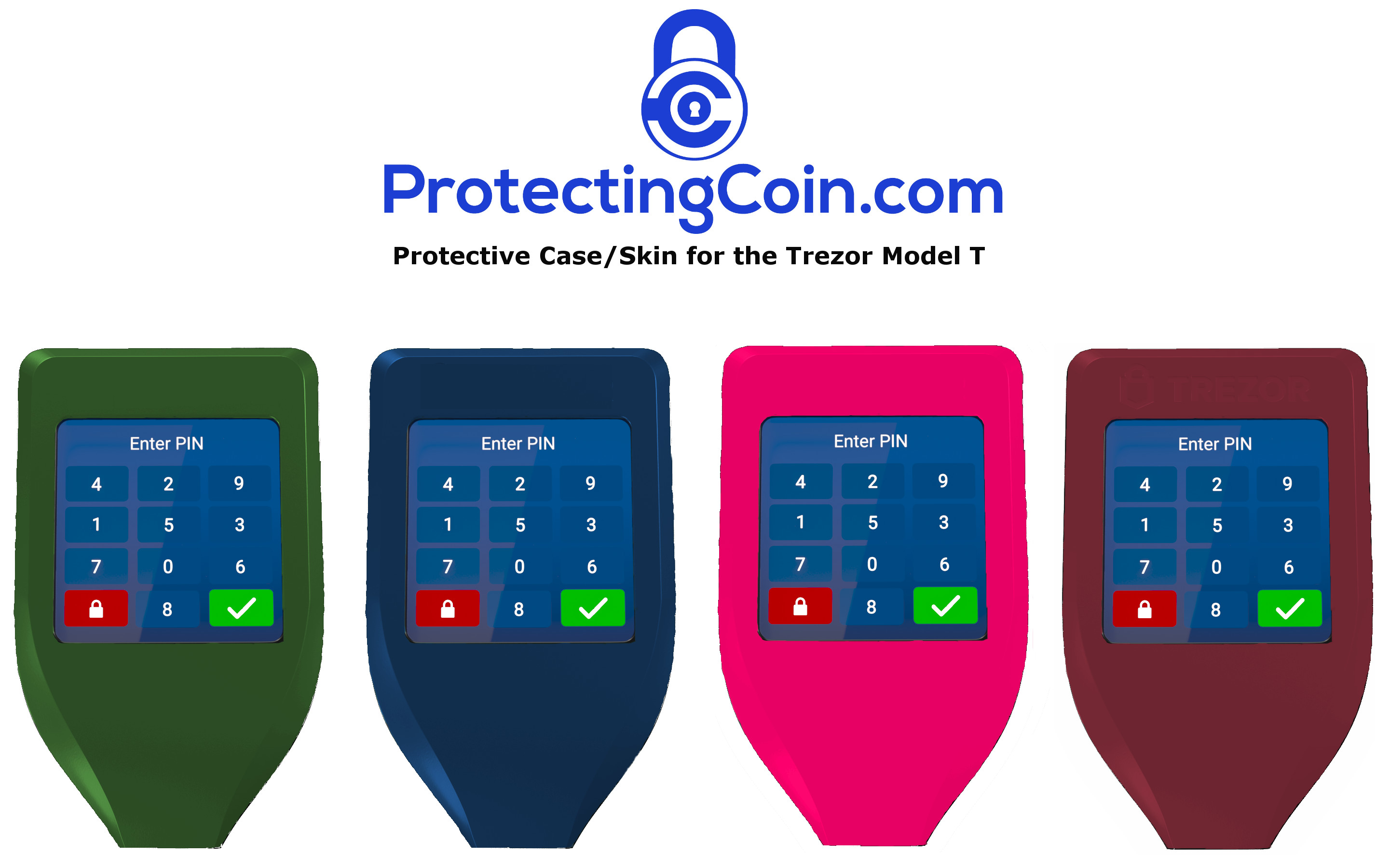 We have been using the newly released Trezor Model T Hardware Wallet for a few days now and wanted to provide a quick update on an error we came across during initial setup.

After unboxing the new Model T (excellent new packaging with the magnetic mount), we took some time to remove all of the Security seal adhesive.  The tamper security seal has been moved to the Trezor Model T body and goes over the USB C connection on the wallet.  (The original Trezor One had two tamper seals on the packaging but none on the wallet).  The adhesive does take some work to get off but rubs off with a little work.  Some have reported using different chemicals to remove the adhesive but we don’t believe that is really needed and some chemicals could react with the plastic body so use caution with chemicals when removing the adhesive.

After the Model T was all cleanup up, we connected to a Windows 10 PC with the provided USB-C cable (approx 12 inch USB-C cable).  Following the 3 simple steps to begin setup we went to trezor.io/start and had the option of setting up a Trezor One or Trezor Model T. 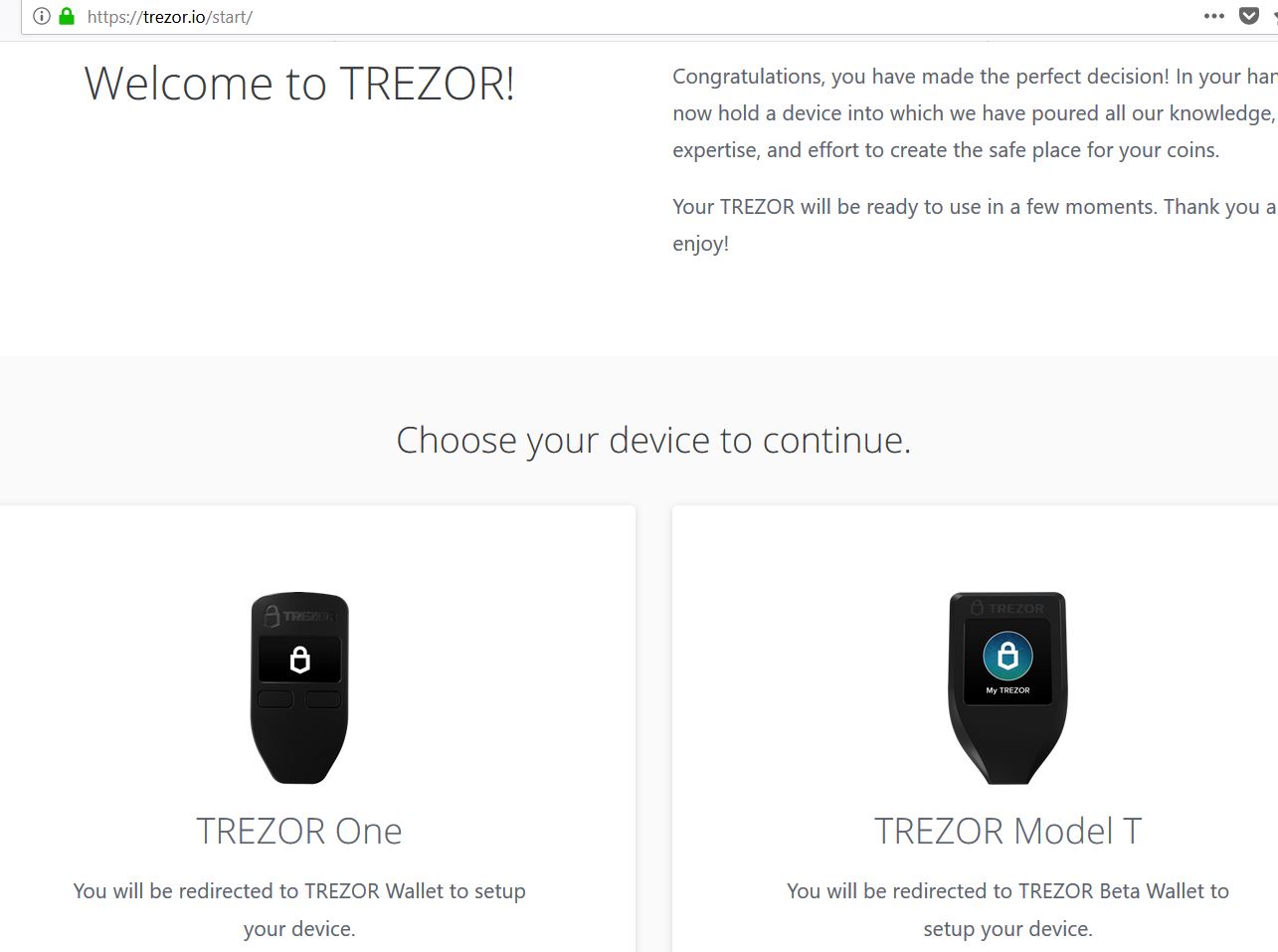 Selected the Trezor Model T and the next step was to install the Trezor Bridge.  The Bridge software is used to communicate with the Trezor Wallet and is available for Windows, Linux and Mac.  The Bridge is a small install file and only took a few seconds to download and install.

The next step is where we ran into some issues and received an error in the portal of “Action was interrupted – Error Details: LIBUSB_ERROR_NOT_SUPPORTED”.

Started with typical troubleshooting steps of disconnecting and reconnecting the wallet, closed all browser windows and reopened and rebooted PC to make sure no issues with initial install, browser or connection.  All these steps resulted in the same error of LIBUSB_ERROR_NOT_SUPPORTED.  Next, we uninstalled and reinstalled the new bridge software, only to receive the same error.  Spent a little time reviewing error logs and was able to see the step it was failing on but not why.

At, this point, it was time to hit up the forums and see if anyone else had come across the same error when setting up the new Trezor Model T.  At this point there was only around 1000 or so shipped worldwide so the install base was pretty small at that point.  The forums did point to an email from Trezor support with the same error reported and a note that a box (around 100 units) did make it out of manufacturing with an older version of the bootloader installed and this error is related to the older bootloader and some incompatible issue with some USB ports.  The impacted bootloader was version 2.0.0 and the correct version (without the issue) was 2.0.1.  This issue could impact batch numbers labeled with 08-2018 and 09-2018 (*note, just because you have this batch number it does not mean you will have the older 2.0.0 bootloader as only around 100 units from that batch slipped through shipping).  To confirm your version of the bootloader and firmware, swipe across the Trezor Model T screen right as you connect.

The test confirmed the Model T was already on the most recent version of the bootloader (2.0.1) but there were a few comments in the forums that reinstalling the bootloader resolved the error even when they already  had the latest.

To reinstall the bootloader you will need a microSD card.  Of course in the middle of the night, when you really need one, they will be impossible to find, regardless of how many you have seen in a drawer the week before.  After a quick trip out to buy a $9.88 microSD card with SD card adapter we were ready to go with updating the bootloader.  The process to update the bootloader is relatively simple and only takes a few minutes.

We connected our Model T, went to the portal and …same error!  A reflash of the bootloader again resulted in the same error.

The end fix ended up only taking a minute and was not difficult after getting on the right path.  We look at the experience as a positive one (silver lining) though as it presented a learning opportunity to learn how to flash the bootloader using the new microSD slot that has been included with the Model T.  Hopefully this post can help you out if you just received your Model T and encounter an issue with your old bridge software causing a conflict.

Ledger released a new Firmware version (1.4.1) for the Ledger Nano S.  “Firmware” is the embedded software on a device that works as the operating instruction for the device. 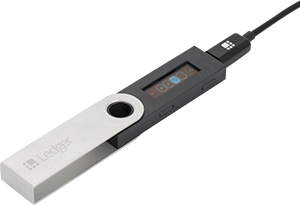 The Firmware update makes some changes to the user interface, adds support for 18 Cryptocurrency interfaces being installed on the device at one time; this was a big complaint on the previous firmware as it only allowed 4 or 5 at any one time to be installed.   The new Firmware also adds some new methods to lock the device with a 3 second push of both buttons, a method to force users to confirm their recovery seed backup during the setup phase (a good thing) and some optimizations to the speed of the device.

Those are all positives updates but the security update included in the firmware, that you are most likely to hear about, is the resolution of an exploit related to exposing the Private Key on the device.  You should take action to install the new Firmware ASAP, the chance of you being impacted by the exploit is unknown with the information currently released.  Here is a quote from the Ledger update,

Important note: there are some claims on Reddit and Twitter about a critical security issue being found on the Nano S. This is incorrect. The issues found are serious (that’s why we highly recommend the update), but NOT critical. Funds have not been at risk, and there was no demonstration of any real life attack on our devices. We will disclose all technical details after March 20th.

From the information we have reviewed (full reports will not be released until late March as this allows people to patch before releasing full details), the hack to expose a devices private key would require physical access to the device before the seed was created, a 3rd party installing a specific firmware or application, and access to the computer you are using for the Ledger to install specific software and perform specific transaction processes (again, this is early information and some may be speculation at this point as Ledger and the security researcher that discovered the bug have not released a full report.  Ledger has confirmed that there are no cases of this bug being reported in the real world and has only been reproduced in a lab.

More detailed information of new features included in this update:

We do recommend you update as soon as possible to correct this potential bug and also for the new features. While we understand the wide spread concern of such bugs it is important to realize that with each bug  and resulting patch/update, the systems and devices become stronger and more secure.

*Note, heavy load on the Ledger servers to pull down the Firmware update may cause some delays in downloading the update.  If you are not able to update right away, wait a little while and retry.